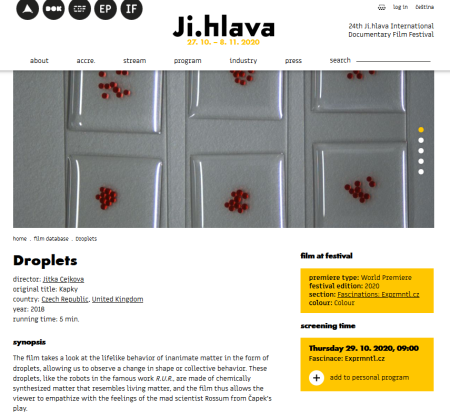 Čapek’s science-fiction work R.U.R. is about a mad scientist Rossum that attempted by chemical synthesis to imitate the living matter known as protoplasm until he suddenly discovered a substance which behaved exactly like living matter although its chemical composition was different.

…this is what he wrote down in his chemical notes: “Nature has found only one way of organising living matter. There is however another way which is simpler […] This other path along which life might have developed is what I have just discovered.” Just think: he wrote these words about a blob of some kind of colloidal jelly that not even a dog would eat. Imagine him sitting with a test tube and thinking about how it could grow out into an entire tree of life made of all the animals starting with a tiny rotifers and ending with … ending with man himself. Man made of different material than we are… (Čapek, 1920)

The relevance of these statements to Artificial Life is obvious. If you want to empathize with Rossum, watch our audio-video art work titled “Kapky”. We believe that you will be as fascinated as we are when observing the life-like behaviour of non-living matter. Our artificial life research focuses on experimental study of droplets (in Czech “Kapky”) and our movie shows several life-like properties of these droplets including shape changes (Čejková et al., 2016), chemotaxis (Čejková et al., 2014), or collective behaviour (Čejková and Ikegami, 2017). We started to call these intriguing droplets as chemical (or liquid) robots (Čejková et al., 2017).

As we approach the 100th anniversary of Čapek’s play, Artificial Life is still concerned with the science, creativity and ethical considerations that these ideas raise. Our movie aims to pay tribute to these pioneering ideas, and to show new ways that they can be used to make art.

All the experiments presented in this movie were performed by Jitka Čejková. The system consists of sodium decanoate aqueous solution as the continuous phase, and decanol droplets (coloured with Oil red O) as the disperse phase. In some cases NaCl was added. The experiments were performed on microscopic glass slides, cover slips of various dimensions and shapes or round glass Petri dishes. The experiments were monitored using a camera from the top view. The movie shows both individual images and image sequences speeded up compared with real-time.

The audio for the piece was performed by Simon Hickinbotham, using a new technique for music production called live coding. Using this approach, patterns of audio synthesis are written in small chunks of ascii computer code, using a Haskell-based domain specific language called TidalCycles (McLean, 2014). The technique echoes many of the features of Artificial Life: the specification is dynamic, changing through time; the relative frequency of random elements in the performance can be controlled; emergent structures can be rejected or assimilated into the piece; there is a loose coupling between the sub-components, mediated by the composer.